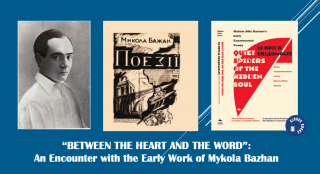 Globus Books Literary Translation Round Table is honored to host a reading from the bilingual Ukrainian-English collection Quiet Spiders of the Hidden Soul: Mykola (Nik) Bazhan’s Early Experimental Poetry (Academic Studies Press, 2020).
This event is in English and Ukrainian and will be held on Zoom on January 11, 2021, at 10.00 am PDT (SF), 1 pm EDT (NY). There will be a limited number of seats; please contact Globus Books via FB messenger to register. We will also be live streaming the event on our YouTube channel (https://www.youtube.com/c/GlobusBooksSF/videos) and later will share the edited version of the program.
The bilingual Ukrainian-English collection Quiet Spiders of the Hidden Soul: Mykola (Nik) Bazhan’s Early Experimental Poetry (Academic Studies Press, 2020) brings together the most interesting experimental works by Mykola (Nik) Bazhan, one of the major Ukrainian poets of the 20th century. An ardent Modernist, Bazhan was known for his idiosyncratic style and unique vocabulary. After Stalinist rule forced the poet into the straightjacket of officially sanctioned Socialist Realism, his early texts have been dismissed as both irrelevant and subversive. Many poems from Bazhan’s three remarkable early collections (1926, 1927, and 1929) remain unknown to readers, both in Ukraine and the West. The publication for the first time makes these outstanding works available.
More than fifteen translators and writers joined forces for this massive project, presenting a diverse set of translation techniques and approaches to collaboratively tackle this challenging corpus.
Lev Fridman and Oksana Rosenblum will briefly describe the stages of the project as it grew from a two-person team and a single poem, followed by readings from the volume in Ukrainian and English.
Readers TBD.
Lev Fridman is a Speech-Language Pathologist based in New York City. He has facilitated translation projects and publications, and his own writings and translations have appeared in Ugly Duckling Press, Odessa Review and The Café Review.
Oksana Rosenblum is an art historian and translator residing in New York City. Her projects have included visual research for the newly created museums of Jewish History in Warsaw and Moscow. Oksana’s poetry translations from Ukrainian and book reviews appeared in Kalyna Review, National Translation Month, and Versopolis.
Globus Books is an independent bookstore serving San Francisco since 1971. It offers a wide-ranging stock of books on all things Russia. Globus is actively working with the libraries across the states on completing their holdings for Russian publications, both contemporary and out-of-print. The Globus Books team is well-known for its expertise in first editions of Russian literature, books on the Russian avant-garde, early imprints and travel and voyage books. Under the new management, Globus strives to serve the Bay Area, bridging gaps, continuing cultural traditions and giving voice to unrepresented communities in Russia and the US. Globus Books features several series of literary and cultural events on its YouTube Channel (https://www.youtube.com/c/GlobusBooksSF), including Literary Translation Round Table, History/Anthropology, Playtime and Storytime for children and more.
This program is produced and hosted by Zarina Zabrisky, the author of three short story collections and a novel "We, Monsters" (Numina Press). Zabrisky's work appeared in nine countries in over fifty literary magazines and anthologies, including The Nervous Breakdown, A Capella Zoo, Eleven Eleven, The Rumpus, Guernica, and received nominations and awards. Zabrisky runs literary and cultural programs at Globus Books.