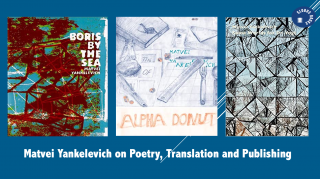 This event is in English and will be held on Zoom on October 9, 2020, at 4.00 pm PST (SF), 7 pm EST (NY). There will be a limited number of seats; please contact Globus Books via FB messenger to register. We will also be live streaming the event on our YouTube channel (https://www.youtube.com/c/GlobusBooksSF/videos) and later will share the edited version of the program.

Ugly Duckling Presse is a nonprofit publisher for poetry, translation, experimental nonfiction, performance texts, and books by artists. Through the efforts of a volunteer editorial collective, UDP was transformed from a 1990s zine into a mission-driven small press that has published more than 300 titles to date, and produced countless prints and ephemera.
UDP favors emerging, international, and “forgotten” writers, and its books, chapbooks, artist’s books, broadsides, and periodicals often contain handmade elements, calling attention to the labor and history of bookmaking.


The interviewer is Zarina Zabrisky, the author of three short story collections and a novel "We, Monsters" (Numina Press). Zabrisky's work appeared in nine countries in over fifty literary magazines and anthologies, including The Nervous Breakdown, A Capella Zoo, Eleven Eleven, The Rumpus, Guernica, and received nominations and awards. Zabrisky runs literary and cultural programs at Globus Books.