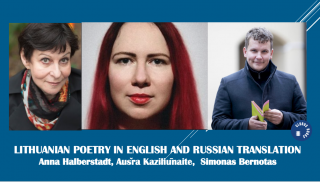 Globus Books Literary Translation Round Table is honored to host a poetry reading in Lithuanian, English ad Russian. Aušra Kaziliūnaitė, Simonas Bernotas and Anna Halberstadt will read the originals and translations in three languages, talk about Lithuanian poetry and what translation means for poets from a small country with rich poetic traditions. Vilnius is a city of Lithuanian, Polish and Yiddish poetry, Avram Sutzkever and Moshe Kulbak among the most prominent.
This event is in English and will be held on Zoom on November 18, 2020, at 1.00 pm PST (SF), 4 pm EST (NY), 11.00 pm Vilnius. There will be a limited number of seats; please contact Globus Books via FB messenger to register. We will also be live streaming the event on our YouTube channel (https://www.youtube.com/c/GlobusBooksSF/videos) and later will share the edited version of the program.
Aušra Kaziliūnaitė is a poet and philosopher, one of the most distinguished representatives of the younger generation of Lithuanian poets and is an author of five poetry books (The FirstLithuanian Book, 2007; 20% Concentration Camp, 2009; The Moon Is a Pill, 2014; I Am Crumbled Walls, 2016; There is No Sea, will be published on Autumn 2020). Kaziliūnaitė’s poems were translated into 16 languages. In 2018, her poetry collection of selected poems The Moon Is a Pill (translated by Rimas Užgiris and published by Parthian Books) was included by literary scholar Jayde Will in the top five of the best English-translated books written by authors from the Baltic States. Her works have received prestigious awards (The Elena Mezginaitė and Jurga Ivanauskaitė prizes as well as the Young Artist Award of the Ministry of Culture of the Republic of Lithuania), while the collection The Moon Is a Pill (2014), was ranked in the top five list of the Best Poetry Books of 2015. She was invited to the International Writing Program 2018 (IWP) in the USA and participated courtesy of the Bureau of Educational and Cultural Affairs at the U.S. Department of State. Aušra is the Vice-Chair of the Lithuanian Writers’ Union and main program curator and coordinator of the literature festival and book fair Books’ Weekend in Vilnius, Lithuania.
Simonas Bernotas, a Lithuanian poet, translator, was born in Kaunas in 1993. Now lives in Vilnius and studies intermediate literature at Vilnius University. His poetry has been published in Šiaurės Atėnai, Literatūra ir Menas, Metai and Quarterly West, anthologies of Poetry Spring and Slinktys. His first book "Reivas" (Rave) was published in 2019. His poetry has been translated to English, Polish and Russian languages.
Anna Halberstadt’s collection of poetry “Vilnius Diary” was published in the Mudfish Individual Poet Series, Box Turtle Press, in the summer 2014. “Green in a Landscape with Ashes” was pubished by New Meridian Arts in 2018.Anna’s poetry collection in Russian “Transit” was published in June 2016, by West-Consulting, Moscow. “Gloomy Sun” was published in 2017 by Evgeny Stepanov publishing house in Moscow in 2017. First collection of poetry by Eileen Myles in Russian, translated by Anna Halberstadt– “Selected Selected,” was published by “Russian Gulliver” in Moscow in April 2017. Her volume of poetry by Edward Hirsch into the Russian “Nocturnal Fire” had been published by Evgeny Stepanov’s Publishing House in 2017. Halberstadt was a finalist in the 2013, 2015 Mudfish poetry contests and in Atlanta Review 2015 contest, a semi-finalist for the Paumanok Poetry Award 2015, a winner of the International Merit Award in Poetry 2016 International Poetry Competition in Atlanta review. Poem “I Was Reborn” was nominated for the Pushcart Prize 2014 and “You Can Be in Love with a Man,” for the Pushcart prize 2016, by the Mudfish journal. She was awarded the Poetry Prize 2016 for a group of poems in Russian by Children of Ra journal. “Vilnius Diary” in Lithuanian has become one of TOP10 books, published in Lithuania in 2017, named by the Lithuanian news site Lt.15. It was also chosen for the list of most important books in translation of 2017 by the Lithuanian Translators Association. Нalberstadt was named Translator of the Year by the literary journal Персона PLUS 2017 for her translation into the Russian of Bob Dylan’s poem “Brownsville Girl.” She is the guest-editor of “The Cafe Review” Special Russian Issues 2019 and 2020 and a member of the American PEN Center.
Globus Books is an independent bookstore serving San Francisco since 1971. It offers a wide-ranging stock of books on all things Russia. Globus is actively working with the libraries across the states on completing their holdings for Russian publications, both contemporary and out-of-print. The Globus Books team is well-known for its expertise in first editions of Russian literature, books on the Russian avant-garde, early imprints and travel and voyage books. Under the new management, Globus strives to serve the Bay Area, bridging gaps, continuing cultural traditions and giving voice to unrepresented communities in Russia and the US. Globus Books features several series of literary and cultural events on its YouTube Channel (https://www.youtube.com/c/GlobusBooksSF), including Literary Translation Round Table, History/Anthropology, Playtime and Storytime for children and more.
This program is produced and hosted by Zarina Zabrisky, the author of three short story collections and a novel "We, Monsters" (Numina Press). Zabrisky's work appeared in nine countries in over fifty literary magazines and anthologies, including The Nervous Breakdown, A Capella Zoo, Eleven Eleven, The Rumpus, Guernica, and received nominations and awards. Zabrisky runs literary and cultural programs at Globus Books.