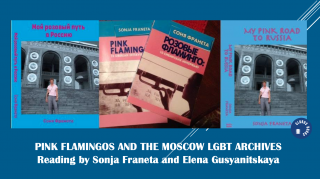 This event is in English and Russian and will be held on Zoom on December 10, 2020, at 10.00 am PDT (SF), 1 pm EDT (NY) and 21.00 Moscow. There will be a limited number of seats; please contact Globus Books via FB messenger to register. We will also be live streaming the event on our YouTube channel (https://www.youtube.com/c/GlobusBooksSF/videos) and later will share the edited version of the program.

First published in Russian, Franeta's "Pink Flamingos" is a collection of interviews with LGBTQs in Siberia that were transcribed and edited by LGBT Archive members. The book was an instant success and sold out in 2004.

"My Pink Road to Russia" is a mix of memoir, stories, poems, and essays based on Franeta’s studies and adventures in Russia. It includes tales of her Yugoslav immigrant family, her coming out in Russia in 1977, her travels to Kosovo, South Africa, and finally her life in Russia in the 1990s, including a report on the first gay and lesbian conference and film festival in Moscow and St. Petersburg in 1991, the story of her Trans-Siberian Railway trip with Siberian friends, and essays on poets Marina Tsvetaeva and Sofia Parnok and their relationship.

Sonja Franeta is a writer, educator and activist born in the Bronx, New York to an immigrant Yugoslav family. She received a Master’s degree in Russian Language and Literature from New York University and a Master’s in Comparative Literature from U.C. Berkeley. She is the author of two books Pink Flamingos and My Pink Road to Russia, both available in Russian (Розовые фламинго и Мой розовый путь в Россию). She is passionate about Russian literature, culture, and queers. She has been teaching English language and Composition and is currently retired, living in Florida and in Spain.

Elena Gusyatinskaya is the creator and curator of the Moscow Lesbian and Gay Archives (ALG). Born in Moscow, she is a teacher of French and translator. In the early 90s, she began collecting materials on the history of homosexuality in Russia at the heart of the archive. The collection consists of Lesbian-Gay press, fiction, non-fiction and scientific books, press clippings reflecting various aspects of the life of sexual minorities, video materials, documents on the history of the movement and its current state, digitized archive materials. Throughout the years of the archive's existence, the archive became a resource and meeting place for Russian and international scholars and queer community. Gusyatinskaya has shared these materials, provided the opportunity to copy and scan, and advised researchers, journalists and students on the subject. She has been invited to speak on the LGBT Archives and on the subject of homosexuality at several conferences and festivals both in Russia, the former USSR, and Europe.

Globus Books is an independent bookstore serving San Francisco since 1971. It offers a wide-ranging stock of books on all things Russia. Globus is actively working with the libraries across the states on completing their holdings for Russian publications, both contemporary and out-of-print. The Globus Books team is well-known for its expertise in first editions of Russian literature, books on the Russian avant-garde, early imprints and travel and voyage books. Under the new management, Globus strives to serve the Bay Area, bridging gaps, continuing cultural traditions and giving voice to unrepresented communities in Russia and the US. Globus Books features several series of literary and cultural events on its YouTube Channel (https://www.youtube.com/c/GlobusBooksSF), including Literary Translation Round Table, History/Anthropology, Playtime and Storytime for children and more.

This program is hosted and produced by Zarina Zabrisky, the author of three short story collections and a novel "We, Monsters" (Numina Press). Zabrisky's work appeared in nine countries in over fifty literary magazines and anthologies, including The Nervous Breakdown, A Capella Zoo, Eleven Eleven, The Rumpus, Guernica, and received nominations and awards. Zabrisky runs literary and cultural programs at Globus Books.