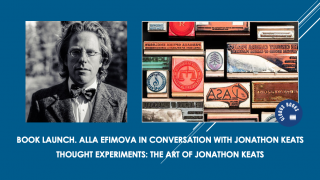 Globus Books is excited to host Jonathon Keats in conversation with Alla Efimova, presenting the new book: Thought Experiments: The Art of Jonathon Keats. Edited by Julie Decker and Alla Efimova. Hirmer Publishers/The University of Chicago Press, 2021.
This event is in English. It will be held on Zoom on March 3, 2021, at 4.00 pm PDT (SF), 7 pm EDT (NY). There will be a limited number of seats; please contact Globus Books via FB messenger to register. We will also be live streaming the event on our YouTube channel (https://www.youtube.com/c/GlobusBooksSF/videos) and later will share the edited version of the program.
Jonathon Keats’ work as an artist and thinker is compelling for our time. Keats poses critical questions, asks us to fundamentally reconsider our assumptions, and proposes radical methods of response. In a time when the environment and human lifeways are experiencing unprecedented change, thought leaders like Keats are needed to encourage us to consider possibilities—from the absurd to the profound. Since the turn of the millennium, Keats has comprehensively extended his academic training in philosophy by prolifically presenting conceptual art projects that he refers to as “thought experiments.” These include installations and performances in museums and galleries around the globe. His motivations are to make space for exploring ideas, offering provocations, and confronting systems we generally take for granted. By prototyping alternative realities—systematically asking “what if?”—these projects probe the world in which we live, exploring the potential for societal change.
Jonathon Keats is an experimental philosopher, artist, and writer. His conceptually-driven interdisciplinary art projects have been hosted by institutions ranging from the Los Angeles County Museum of Art to Arizona State University to UNESCO. Keats is the author of six books, most recently You Belong to the Universe: Buckminster Fuller and the Future, published by Oxford University Press. He is currently a Polar Lab artist at the Anchorage Museum and an artist-in-residence at the SETI Institute, UC San Francisco’s Memory & Aging Center, and UC Berkeley's Sagehen Creek Field Station. His art is represented by Modernism Gallery in San Francisco.
Alla Efimova, PhD, is a contemporary art curator and museum specialist with a background in critical theory. She is the founder and principal of KunstWorks, a consulting firm that addresses the growing need for legacy planning among artists of the post-war generation. As the former Director and Chief Curator of The Magnes at the University of California Berkeley, one of the largest museum collections of Jewish art and history, Efimova engaged cutting-edge scholars as guests curators and collaborators and commissioned important regional and international artists to create site-specific projects, including two works by Jonathon Keats. She also co-published two of his artist books together with Modernism Inc.: Yod the Inhuman and Zayin the Profane. Efimova is an author of several books and catalogs and has taught at the University of California Berkeley, Santa Cruz, and Irvine as well as the San Francisco Art Institute.
Globus Books is an independent bookstore serving San Francisco since 1971. It offers a wide-ranging stock of books on all things Russia. Globus is actively working with the libraries across the states on completing their holdings for Russian publications, both contemporary and out-of-print. The Globus Books team is well-known for its expertise in first editions of Russian literature, books on the Russian avant-garde, early imprints, and travel and voyage books. Under the new management, Globus strives to serve the Bay Area, bridging gaps, continuing cultural traditions, and giving voice to unrepresented communities in Russia and the US. Globus Books features several series of literary and cultural events on its YouTube Channel (https://www.youtube.com/c/GlobusBooksSF), including Literary Translation Round Table, History/Anthropology, Playtime and Storytime for children, and more.
This program is produced and hosted by Zarina Zabrisky, the author of three short story collections and a novel "We, Monsters" (Numina Press). Zabrisky's work appeared in nine countries in over fifty literary magazines and anthologies, including The Nervous Breakdown, A Capella Zoo, Eleven Eleven, The Rumpus, Guernica, and received nominations and awards. Zabrisky runs literary and cultural programs at Globus Books.