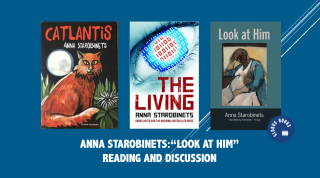 Globus Books is honored to invite you to a reading and discussion of "Look at Him" by Anna Starobinets (translated into English by Katherine E. Young). Katherine E. Young will be joined by translators, scholars and writers Jane Bugaeva, Muireann Maguire, Jamie Rann, and Svetlana Satchkova, and Zarina Zabrisky. The program will be moderated by Muireann Maguire.
Anna Starobinets is a writer and scriptwriter. She works in various genres: sci-fi, dystopias and horrors for adults; fairy and detective stories for children. Starobinets received multiple Russian and European literature awards, including the European Science Fiction Society (ESFS) award in the «Best European Sci-fi author» category (EuroCon-2018). Her children's book series "А Beastly Crimes Book" was a bestseller in Russia and was translated into nine languages. Starobinets' books are translated and published in the UK, US, Japan, Spain, Germany, France, Italy, Netherlands, Sweden, Bulgaria, Poland, Greece, Latvia, Czech Republic, Turkey, and more. Starobinets teaches her own creative writing workshop and she is the author and presenter of educational games "Literary mafia: interactive detective" and "Literary magic: interactive fantasy".
Her only non-fiction autobiographical book "Look at him" brings to light the inhumane attitude of the Russian healthcare system and society towards women pregnant with fetuses with pathologies. Starobinets wrote it to speak out loud about this traditionally silenced problem in order to force social changes. The book started a broad discussion of the subject in literary and medical circles. Anna is a widow of writer Alexander Garros, and she is raising two kids and a poodle Coconut.
Jane Bugaeva translates Russian children’s literature, as well as illustrated and whimsical texts for all ages. Her prose translations include Anna Starobinets’ Catlantis (Pushkin Press, NYRB) and her four-book middle-grade series Beastly Crimes (Dover Publications). She lives in North Carolina with her husband and daughter.
Muireann Maguire is Senior Lecturer in Russian at the University of Exeter; she is a freelance translator and a researcher in Russian literature from the nineteenth to twenty-first centuries. She is working on a book-length study of fictional accounts of pregnancy and childbirth in Russian and Western literature called Hideous Agonies, and she irregularly writes a blog on the same topic in global literature, The Pregnancy Test.
James Rann is a scholar and translator of Russian literature, based at the University of Glasgow. He mostly translates contemporary fiction, notably Anna Starobinets, but his research focuses on the avant-garde—the subject of his recent book The Unlikely Futurist: Pushkin and the Invention of Originality in Russian Modernism.
Svetlana Satchkova is a NYC-based writer and journalist. While working as a magazine editor in her native Russia, she published three books of prose. Presently, she is completing her first novel in English and pursuing an MFA in Fiction at Brooklyn College, where she is a Truman Capote fellow.
Katherine E. Young is the author of Woman Drinking Absinthe and Day of the Border Guards. She has translated Look at Him by Anna Starobinets, as well as work by Akram Aylisli, Inna Kabysh, and numerous Russophone poets; she was named a 2017 NEA translation fellow. She served as the inaugural poet laureate for Arlington, Virginia. https://katherine-young-poet.com/
Zarina Zabrisky is the author of three short story collections and a novel "We, Monsters" (Numina Press, 2014). Zabrisky's work appeared in nine countries in over fifty literary magazines and anthologies, including The Nervous Breakdown, A Capella Zoo, The Rumpus, Guernica, and received nominations and awards, including 2013 Acker Awards for Avant-Garde Excellence. Zabrisky runs literary and cultural programs at Globus Books.
This event is in English and will be held on Zoom on June 23, 2021, at 10.00 am PST (SF), 1.00 pm EST (NY), 20.00 (Moscow.)

There will be a limited number of seats; please contact Globus Books via FB messenger to register. We will also be live streaming the event on our YouTube channel (https://www.youtube.com/c/GlobusBooksSF/videos) and later will share the edited version of the program.