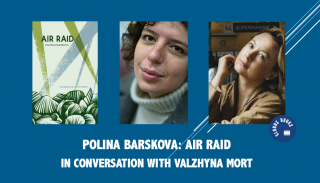 Globus Books is honored to invite you to Polina Barskova's new poetry book presentation. "Air Raid", translated by Valzhyna Mort, is published by Ugly Duckling Presse (2021.) Barskova will present her new book in conversation with Valzhyna Mort and Matvei Yankelevich (UDP.)
This event is in English and will take place on October 23, at 12.00 PM PST (SF), 3.00 PM PST (NY), 9.00 PM Central European Time.
There will be a limited number of seats; please contact Globus Books via FB messenger to register.
We will also be live streaming the event on our YouTube channel (https://www.youtube.com/c/GlobusBooksSF/videos) and later will share the edited version of the program.
The Siege of Leningrad began in 1941 and lasted 872 days, resulting in the most destructive blockade in history. Already shaken by Stalin’s purges of the ’30s, Leningrad withstood the siege at a great human cost. Air Raid takes us through the archives of memory and literature in this city of death. Polina Barskova’s polyphonic poems stretch the boundaries of poetic form—this is what we’re left with after poetry’s failure to save nations and people: post-death, post-Holocaust, post-Siege, post-revolution; post-marriage, and post-literature. How does language react to such a catastrophe? How does a poet find language for what cannot be told? This new translation of a leading contemporary Russian poet confronts English excavating its muteness, stutter, and curse.
"This elegiac and terrifying book, so filled with voices' various rhythms, will stay in my memory as a moment of stillness..." -- Ilya Kaminsky
POLINA BARSKOVA is a poet and a scholar, author of twelve collections of poems and two books of prose in Russian. Her collection of creative nonfiction, “Living Pictures,” received the Andrey Bely Prize in 2015 and is forthcoming in German with Suhrkamp Verlag and in English with NYRB. She edited the Leningrad Siege poetry anthology Written in the Dark (UDP) and has three collections of poetry published in English translation: This Lamentable City (Tupelo Press), The Zoo in Winter (Melville House) and Relocations (Zephyr Press). She has taught at Hampshire College, Amherst College, and Smith College. In 2021, she will be teaching Russian Literature at the University of California at Berkeley.
VALZHYNA MORT was born in Minsk, Belarus. She is the author of Factory of Tears, Collected Body (both from Copper Canyon Press), and Music for the Dead and Resurrected (FSG). She is the recipient of an NEA translation grant, fellowships from the Lannan Foundation and the Amy Clampitt Fund from the Berkshire Taconic Community Foundation, the 2010 Bess Hokin Prize from the Poetry Foundation, and the 2018 Gulf Coast Prize in Translation. She is the translator of Air Raid by Polina Barskova (UDP). She teaches at Cornell University and writes in English and Belarusian.
MATVEI YANKELEVICH is a poet, editor, and translator. His books include Some Worlds for Dr. Vogt (Black Square Editions), Alpha Donut (United Artists Books) and Boris by the Sea (Octopus Books), as well as several chapbooks. He is the translator of Today I Wrote Nothing: The Selected Writings of Daniil Kharms (Overlook/Ardis), and co-translator (with Eugene Ostashevsky) of Alexander Vvedensky’s An Invitation for Me to Think (NYRB Poets), which received the 2014 National Translation Award. He has contributed translations to several anthologies including Night Wraps the Sky: Writings By and About Mayakovsky (FSG), and Contemporary Russian Poetry (Dalkey Archive). He curated a portfolio of contemporary Russian poetry and poetics for Aufgabe #8.

Matvei is one of the founding members of the Ugly Duckling Presse editorial collective. Since 2002, he has curated UDP’s Eastern European Poets Series, and was a co-editor of The Emergency Gazette (1998-2001) and of 6×6 magazine (2000-2017). He served as co-executive director of UDP for several years, and then as a member of UDP’s Working Collective as managing editor and production manager. Matvei has received fellowships from the National Endowment for the Arts, the New York Foundation for the Arts, and the National Endowment for Humanities. He has taught at the Jack Kerouac School of Disembodied Poetics (Naropa), Hunter College, Colorado College, Long Island University, and Wesleyan University. Since 2009, he teaches courses on translation and book history at Columbia University’s School of the Arts (Writing MFA), and is a member of the Writing faculty at the Milton Avery Graduate School of the Arts at Bard College.

UGLY DUCKLING PRESSE is a nonprofit publisher for poetry, translation, experimental nonfiction, performance texts, and books by artists. Through the efforts of a volunteer editorial collective, UDP was transformed from a 1990s zine into a mission-driven small press that has published more than 400 titles to date, and produced countless prints and ephemera. UDP favors emerging, international, and “forgotten” writers, and its books, chapbooks, artist’s books, broadsides, and periodicals often contain handmade elements, calling attention to the labor and history of bookmaking.
GLOBUS BOOKS is an independent bookstore serving San Francisco since 1971. It offers a wide-ranging stock of books on all things Russia. Globus is actively working with the libraries across the states on completing their holdings for Russian publications, both contemporary and out-of-print. The Globus Books team is well-known for its expertise in first editions of Russian literature, books on the Russian avant-garde, early imprints, and travel and voyage books. Under the new management, Globus strives to serve the Bay Area, bridging gaps, continuing cultural traditions, and giving voice to unrepresented communities in Russia and the US.
GLOBUS BOOKS YOUTUBE CHANNEL features several series of literary and cultural events on its YouTube Channel (https://www.youtube.com/c/GlobusBooksSF), including Literary Translation Round Table, History/Anthropology, Playtime and Storytime for children, and more. The programs are produced by Zarina Zabrisky.
ZARINA ZABRISKY is the author of three short story collections and a novel "We, Monsters" (Numina Press, 2014). Zabrisky's work appeared in nine countries in over fifty literary magazines and anthologies, including The Nervous Breakdown, A Capella Zoo, The Rumpus, Guernica, and received nominations and awards, including the 2013 Acker Award for Avant-Garde Excellence.