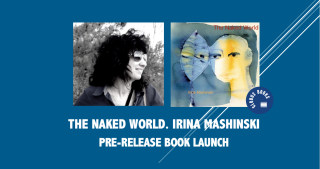 Globus Books is honored to host a pre-release book launch of Irina Mashinski's "Naked World." This event is in English and will take place on February 10, 11 am PST, 2 pm EST. There will be a limited number of seats; please contact Globus Books via FB messenger to register. We will also be live streaming the event on our YouTube channel (https://www.youtube.com/c/GlobusBooksSF/videos) and later will share the edited version of the program.

Globus Books is proud to present Irina Mashinski’s book The Naked World, forthcoming from MadHat Press in March 2022.
Participants also include translators MARIA BLOSHTEYN, ROBERT CHANDLER, and BORIS DRALYUK, the MadHat’s publisher MARC VINCENZ, and poet CHARD deNIORD.
===========================================
From ILYA KAMINSKY’s preface to The Naked World:
“The Naked World is a magical book, a story of four generations of one family, told through poems and cut through with accounts of Stalin’s Great Terror of the Thirties, wide-ranging meditations, and flashes of childhood memories from the Thaw of the Sixties and the post-Thaw Seventies. Divided into four parts – “Patterns,” “The Myth,” “In the Right-of-Way,” and “Borders” – it is also a symphonic book, with themes and variations<...> We explore the “tessellating pattern” of a life – of movement across borders, of the myths that carry us along, of grief transformed into resilience, of déjà vu. <...>
This is a soul-making book, one that doesn't rest easy on the conventional narrative of one refugee's escape, but probes deeper into the music our days make, sometimes against our will."
IRINA MASHINSKI moved to the US from Moscow in 1991. She is the author of eleven books of poetry and essays in Russian. She is co-editor, with Robert Chandler and Boris Dralyuk, of The
Penguin Book of Russian Poetry and of the Cardinal Points Journal. Her work has been translated into several languages and appeared in Poetry International, Plume, The World
Literature Today, Asymptote, and elsewhere.
MARIA BLOSHTEYN was born in Leningrad (St. Petersburg) and emigrated to Canada when she was nine years old. She received her PhD from Toronto’s York University and was a postdoctoral fellow at Columbia University, where she examined Dostoevsky’s impact on American literature and culture. She is the author of The Making of a Counter-Culture Icon: Henry Miller’s Dostoevsky (2007) and the translator of Alexander Galich’s Dress Rehearsal (2009) and Anton Chekhov’s The Prank (2015). Her translations have also appeared in a number of journals and anthologies, including The Penguin Book of Russian Poetry (Penguin Classics, 2015).
ROBERT CHANDLER’s translations from Russian, mostly for NYRB Classics, include works by Alexander Pushkin and Nikolay Leskov; several collections of stories and memoirs by Teffi; and
novels and stories by Vasily Grossman, Andrey Platonov and Hamid Ismailov. He is the editor and main translator of Russian Short Stories from Pushkin to Buida and Russian Magic Tales
from Pushkin to Platonov. Together with Boris Dralyuk and Irina Mashinski, he has co-edited The Penguin Book of Russian Poetry. His forthcoming publications include Pushkin’s Peter the Great’s African (co-translated with Boris Dralyuk) and Vasily Grossman’s The People Immortal.
BORIS DRALYUK is the Editor in Chief of the Los Angeles Review of Books and translator of Isaac Babel, Andrey Kurkov, Maxim Osipov, Mikhail Zoshchenko, and other authors. His poems have appeared in The New York Review of Books, The Hopkins Review, The New Criterion, and elsewhere. His collection My Hollywood and Other Poems is forthcoming from Paul Dry Books in April 2022.
CHARD deNIORD is the author of six books of poetry, most recently In My Unknowing University of Pittsburgh Press, 2020) and Interstate (University of Pittsburgh Press, 2019). He is also the author of two books of interviews with eminent American poets: Sad Friends, Drowned Lovers, Stapled Songs, Conversations and Reflections on 20th Century Poetry (Marick Press, 2011) and I Would Lie To You If I Could (University of Pittsburgh Press, 2018). He retired from teaching at Providence College in 2020, where he is now Professor Emeritus of English and Creative Writing. He has co-founded a number of writing programs. deNiord was the eighth the Poet Laureate of Vermont from 2015 to 2019.

GLOBUS BOOKS YOUTUBE CHANNEL features several series of literary and cultural events on its YouTube Channel (https://www.youtube.com/c/GlobusBooksSF), including Literary Translation Round Table, History/Anthropology, Playtime and Storytime for children, and more. The programs are produced by Zarina Zabrisky.