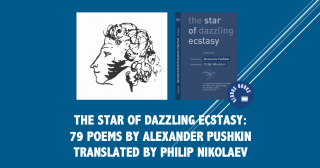 Globus Books is honored to host a Philip Nikolaev, the author of a new book "The Star of Dazzling Ecstasy," a translation of 79 poems by Russia's greatest poet Alexander Pushkin. This event is in English and will take place on February 23, 4 pm PST, 7 pm EST. There will be a limited number of seats; please contact Globus Books via FB messenger to register. We will also be live streaming the event on our YouTube channel (https://www.youtube.com/c/GlobusBooksSF/videos) and later will share the edited version of the program.

ABOUT THIS EVENT
Pushkin’s poetry poses a particularly tough challenge to translators. Russian readers are nearly unanimous in their view that Pushkin is fundamentally untranslatable into other languages and is not assimilable into other cultures. The elegance, precision, and apparent effortlessness of Pushkin’s verse require a translator of comparable virtuosity, but where can one be found that fits such a bill? The situation is complicated by the mainstream practices of poetic translation into Western languages. The idea of translating formally – with rhyme and meter – gradually went out of fashion in the last century. The prevalence of free verse in Western poetry has turned formal translation into a rarity, an anachronism in the eyes of many.
Nevertheless, the Russo-American poet Philip Nikolayev, PhD, a Harvard University graduate, and the author of several collections of English-language poetry, sets out to do just that: to translate Pushkin into English using rhyme and meter while adhering to the poetic form of the original instead of adapting the text to current poetic fashion. Without sacrificing accuracy in the essential, Nikolayev strives to achieve a natural tone, to create “real English poems.” “I cannot think of a better introduction to Pushkin for the English reader,” comments the eminent Pushkin scholar, Harvard’s William Mills Todd III, in his cover blurb.
PHILIP NIKOLAEV is a Russo-American bilingual poet living in Boston. He is a polyglot and translates poetry from several languages. His poems have appeared in literary periodicals internationally, including Poetry, The Paris Review, Harvard Review, and Grand Street. Nikolayev’s verse collections include Monkey Time (Verse/Wave Books, winner of the 2001 Verse Prize) and Letters from Aldenderry (Salt). He co-edits Fulcrum, a serial anthology of poetry and critical writing.
GLOBUS BOOKS YOUTUBE CHANNEL features several series of literary and cultural events on its YouTube Channel (https://www.youtube.com/c/GlobusBooksSF), including Literary Translation Round Table, History/Anthropology, Playtime and Storytime for children, and more. The programs are produced by Zarina Zabrisky.
ZARINA ZABRISKY is the author of three short story collections and a novel "We, Monsters" (Numina Press, 2014). Zabrisky's work appeared in literary magazines and anthologies, including The Nervous Breakdown, A Capella Zoo, The Rumpus, Guernica, and received nominations and awards, including the 2013 Acker Award for Avant-Garde Excellence.