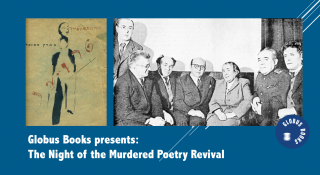 On August 12th, 1952, roughly seven years after the end of World War II and four years after the creation of the state of Israel, 25 Soviet writers, poets and intellectuals who were part of the Jewish Anti-fascist Committee were put on a ludicrous trial for "being enemies of the USSR, agents of American imperialism, bourgeois nationalist Zionists and rebels who sought by armed rebellion to separate the Crimea from the Soviet Union and to establish their own Jewish bourgeois nationalist Zionist republic there." After an unfair trial, all twenty four of the male defendants were sentenced to death, shot in the basement of Moscow's Lubianka prison, and the only female defendant was sentenced to life in prison.

This mass murder, following World War II and the Holocaust, with Russia's pogrom's having one of the highest death tolls of the 6 million Jews who were murdered then, came to be known as "The Night of the Murdered Poets".

It could be said that this event was a continuation of the Holocaust, as a sort of final attempt to annihilate all Jewish culture in Russia and stop the Jewish Anti-fascist Committee from revealing the truth of the horrors of the Holocaust in Russia, as is testified in their collective work The Black Book (Чёрная Книга, Chiornaya Kniga, in Russian, דאָס שוואַרצע בוך‎, Dos shvartse bukh, in Yiddish). However, the event is also separate from the Holocaust, and demonstrates the continued Anti-Jewish sentiment that followed in Russia after World War II, which made many Russian Jews want to immigrate to Israel, while simultaneously showing how the creation of the state of Israel formed a new kind of Anti-Semitism, a paranoid form of Anti-Zionism which even implicated Jews who did not choose to leave their country, and who were not in any form against the nation of Russia, let alone trying to form a Zionist republic in the Crimea.

The Night of the Murdered Poets Poetry Revival aims to question the unfair death sentence of these 24 Soviet Jewish writers and intellectuals, while choosing to focus on celebrating the Yiddish poetry of the victims, from poets such as Peretz Markish (1895–1952), David Hofstein (1889–1952), Itzik Feffer (1900–1952), and Leib Kvitko (1890–1952). It is also an occasion to question the contemporary role of Yiddish culture in the Soviet Union and throughout the Jewish world, with the Yiddish language and its literary heritage which was long suppressed and nearly lost.

HOW TO JOIN: This Zoom panel in English will be recorded and shared on the Globus Books YouTube channel (https://www.youtube.com/c/GlobusBooksSF/). There will be a limited amount of seats, a first-come, first-serve basis. If you are interested to attend the live panel PLEASE MESSAGE Globus Books for details.

The event will be including the reading of the poets' work and memoirs in English, Russian and Yiddish.

The event is organized by Lucienne Rose.

Lucienne Rose is a poet from Northern California, who lives in Marseille, France and writes in English, French, and occasionally Spanish. She studied literature at Paris Sorbonne Cité and the EHESS, and now co-ordinates The Bioptic Review. She teaches English and Critical Thinking at the university level and, when in Paris, goes to Babel Café poetry readings in her free time. She has also participated in the Paris Poetry Brothel, Open Secret, 100 Thousand Poets for Change, and is the English director of the women's writing and theater group Les Writeuses.

Sharon Coleman's a fifth-generation Northern Californian with a penchant for languages and their entangled word roots. She writes for Poetry Flash, co-curates the reading series Lyrics & Dirges and co-directs the Berkeley Poetry Festival. She’s the author of a chapbook of poetry, Half Circle (Finishing Line), and a book of micro-fiction, Paris Blinks (Paper Press). Her work appears in Your Impossible Voice, White Stag, and Ambush Review. She’s been nominated twice for a Pushcart and once for a micro award for blink fiction. She was a finalist for the Luso-American Fellowship for the Disquiet Literary Conference in Lisbon and the Jane Underwood poetry prize. She teaches poetry and creative writing at Berkeley City College.

Yanina Gotsulsky is a photographer and author of “The Speed of Life” — a novel about Tolstoy. She holds a degree in Russian Literature from York University in Toronto and has worked as a professional translator for over three decades. She has collaborated with several renowned Russian literati and her translations of Pasternak's and Akhmatova's work, as well as her original poetry, have appeared in national and international publications.

Mikhail Iossel, the Leningrad-born author of the book of prose "Notes From Cyberground: Trumpland And My Old Soviet Feeling" (New Europe Books, 2018), story collection Every Hunter Wants to Know (W. W. Norton) and coeditor of the anthologies Amerika: Russian Writers View the United States (Dalkey Archive, 2004) and Rasskazy: New Fiction from a New Russia (Tin House, 2010), is a professor of English/Creative Writing at Concordia University in Montreal and the founding director of the Summer Literary Seminars international program. Back in the Soviet Union, he belonged to the organization of samizdat writers, Club-81. Among his awards are the Guggenheim, NEA, and Stegner Fellowships. His stories and other prose, in English and in translation to several languages, have appeared in NewYorker.com, Guernica, Literarian, AGNI, North American Review Threepenny Review, Inertia, Boulevard, Best American Short Stories, and elsewhere. His new book, "Love Like Water, Love Like Fire," a collection of stories and a novella, will be published by Bellevue Literary Press in the spring of 2021.

Hilah Kohen is the News Editor of Meduza in English (meduza.io/en), the Anglophone edition of a Russian-language news outlet. Kohen’s work on the intersections of Russophone literature and politics can also be found in Music & Literature, the Los Angeles Review of Books, and elsewhere. Her translations of poetry by Lida Yusupova are forthcoming in Nashville Review and a volume published by Cicada Press.

Nina Kossman is a Moscow born, bilingual writer, poet, translator of Russian poetry, painter, and playwright. Her paintings and sculptures have been exhibited in Moscow, Philadelphia, and New York. Her English short stories and poems have been published in US, Canadian and British journals. Her Russian poems and short stories have been published in major Russian literary journals. Among her published works are two books of poems in Russian and English, two volumes of translations of Marina Tsvetaeva’s poems, two collections of short stories, an anthology (Gods and Mortals: Modern Poems on Classical Myths) published by Oxford University Press, and a novel. Her new book of English poems, Other Shepherds, has just been published. Her work has been translated into Greek, Japanese, Russian, and Spanish. She received a UNESCO/PEN Short Story Award, an NEA translation fellowship, and grants from Foundation for Hellenic Culture, the Onassis Public Benefit Foundation, and Fundacion Valparaiso. She lives in New York.

Charles Kruger is a writer, artist, and the founder and lead writer for "TheatreStorm," a website that publishes reviews, interviews, and features about Bay Area theatre (currently on hiatus due to the novel corona virus). His writing has been published by The Rumpus, Sparkle + Blink, Writing Without Walls, Red Fez, OnTheBus and various other websites and periodicals. His now-defunct blog, "Storming Bohemia" was referenced by The New York Times and by Harriet The Blog/Poetry Magazine. He currently writes the column "The Storming Bohemian Punks The Muse" for Litseen, a project of San Francisco literary organization, Quiet Lightning, for which he was a founding Board Member and is currently a Board Member Emeritus. He is the editor (under executive editor Annie Finch) for the upcoming website: "Poets ' Craft: a haunting of poetry" which has a planned debut for the Fall Equinox, 2020. His paintings can be seen at zhibit.org/charleskruger. He lives and works by the San Francisco Bay

Irina Mashinski is the author of ten books of poetry in Russian. She is co-editor, with Robert Chandler and Boris Dralyuk, of The Penguin Book of Russian Poetry (Penguin Classics, 2015) and of the Cardinal Points Journal (Brown University, Slavic Studies Department). She moved to the US from Moscow in 1991. Her work has been translated into several languages and appeared in Poetry International, Plume, The World Literature Today, Asymptote, and elsewhere. She is the recipient of several literary awards and International Hawthornden fellow. Mashinski has participated in translating the work of Lev Ozerov, a Russian-Jewish poet who knew several of the murdered poets perosnally and wrote about them.

Colleen Shoshana McKee is the author of six collections of poetry, memoir, and fiction. Her last two, Routine Bloodwork, a finalist for the Charlotte Mew Award from Headmistress Press; and The Kingdom of Roly Polys (Pedestrian Press), are available at Globus Books. She is working on a novel about a Yiddish circus, tentatively titled Shlomo the Strong Man and the Uninvited Guests. Colleen Shoshana grew up in the woods in Missouri, an unlikely place to learn Yiddish and Yenglish from her grandmothers. She now lives in Oakland, where she continues to study Yiddish and works as a writing coach, editor, and tutor. ColleenMcKee.Blogspot.com

Luba Ostashevsky is an author, editor, and teacher. She worked for major publishing houses, such as Nautilus, Palgrave Macmillan, Grove Atlantic and Alfred A. Knopf, and her articles appeared in Al Jazeera, The Boston Globe, Nautilus and Conde Nast Traveler, and The Hechinger Report. She teaches science in Brooklyn High School.

Rose Reyes, is a New York-born, Paris-based writer of poems and stories as well as one of three hosts of SpokenWord. Her memoir, Somewhere in Between, (also the name of her online blog on WordPress), won the 2006 Edward Riviera Autobiography Award. Her poems and short stories have been published by Promethean Literary Magazine, The City at the Center Magazines, Poetry in Motion© in conjunction with the New York City MTA, amongst others. Paris publications include The Biopic Review and Paris Lit Up Magazine. Finalizing an upcoming collection of her poems and stories, Rose has been a proud performing member of the spoken word communities in Paris in addition to being a host at Spoken Word Paris. She enjoys performing stand-up comedy and improvisation, performing regularly on English-speaking comedy shows in Paris and Berlin.

Constant Laval Williams is a Los Angeles-born poet and former resident of Paris, France, where his writing first came of age. He studied creative writing at the University of Southern California where he received the Beau J. Boudreaux Poetry Award. His poetry has appeared or is forthcoming in Hotel Amerika, The American Journal of Poetry, december magazine, Paris Lit Up and others. For more information visit constant-williams.com.

Lydia Hirsch is a poet/writer from California. She has written for Cosmonaut Magazine, Crooked Marquee, and other publications. She has been interested in Yiddish history and culture since she decided to start learning more about her family's history and Jewish history in general.

Zarina Zabrisky is the author of three short story collections, the novel "We, Monsters" and a collaborative book of poetry. Her work has been published in seven countries and won awards and nominations. Zabrisky also does journalism and hosts literary programs at Globus Books.