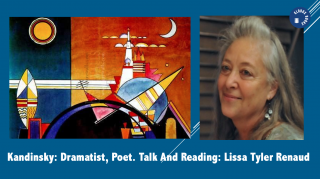 Globus Books presents a talk on Wassily Kandinsky's writings for the theatre and a reading of his poetry by Lissa Tyler Renaud, one of the world's leading scholars of Kandinsky's lesser-known rich heritage.

This event is in English and will be held on Zoom on October 26, 2020, at 1.00 pm PST (SF), 3 pm EST (NY). There will be a limited number of seats; please contact Globus Books via FB messenger to register. We will also be live streaming the event on our YouTube channel (https://www.youtube.com/c/GlobusBooksSF/videos) and later will share the edited version of the program.

PART 1
KANDINSKY: Dramatist, Dramaturg, and Demiurge of the Theatre
Wassily Kandinsky, independently of his revolutionary contributions to painting, also wrote on and for the theatre from 1908 until his death in 1944. In his day, his theories of dramatic art, as well as his own plays, were hailed by great theatrical innovators such as Hugo Ball, founder of Dada, and Oskar Schlemmer, founder of the Bauhaus Theatre. He also crossed paths with important theatrical figures such as Diaghilev, Stanislavsky, Massine, Andre Breton, and many others. Today, although his writings offer an important link between traditional and experimental values in the theatre, they have been almost entirely neglected. This paper, delivered in an earlier version at the Russian State Institute of Performing Arts in St. Petersburg, Russia, offers introductions to Kandinsky’s dramatic theories, to the plays he wrote, and to the two extraordinary programs he outlined for training the theatre artist.

PART 2
Some Known and Unknown Poems by Kandinsky
Kandinsky wrote poetry that was new when he wrote it and is still new now. In the world of early 20th century experimental poetry, a host of painter-poets, sculptor-poets, musician-poets, dancer-poets all wanted to challenge conventional language in one way or another. Kandinsky approached the matter of breaking ground in language from a variety of inventive directions that influenced countless others. What he called the “inner voice” that compelled his work has now been widely heard for over a century, not least through his singular poetry. A longtime recitalist, I will read selections from Kandinsky’s 1912/13 series of groundbreaking poems entitled Sounds--a remarkable departure from Russia’s 19th century “Golden Age” verse poetry--as well as poems unknown in English.

The program is produced and hosted by author Zarina Zabrisky.