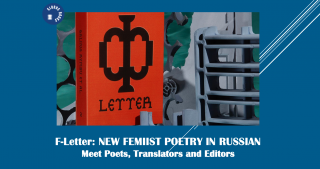 F-LETTER: NEW FEMINIST POETRY IN RUSSIAN / A conversation and reading with poets, translators and editors of the new anthology.

Globus Books is honored and excited to present F-Letter anthology, with the leading feminist poets and literary translators in Russian and the US.

F LETTER assembles the feminist poets who have palpably changed the Russian language over the last decade. Against the backdrop of state violence and oppression, this is electric dissent in pursuit of a democratic, egalitarian future. A lexicon for revolution worldwide. But this anthology's brilliance lies in its rhythm, energy, and depth of emotion--in its universal relevance rather than applied politics.

This conversation will be held on Zoom, at 9.00 am PDT, 12.00 pm EDT, 18.00 Berlin, 19.00 Moscow and will be streaming on the Globus Books YouTube channel here: https://www.youtube.com/c/GlobusBooksSF/videos. To register for Zoom conference, please send a private message to Globus Books Facebook page. Free, but with a limited number of seats.

YULIA PODLUBNOVA, b. 1980 in Sverdlovsk, lives in Ekaterinburg. Podlubnova, also an editor of the publishing project ‘InVersia,’ writes about political coercion and violence with an irony and a skepticism that contrasts with the more prominent feminist trend of poetics of traumatic sincerity.

GALINA RYMBU, b. 1990 in Omsk, currently lives in Lviv, Ukraine. Rymbu is a poet, activist, and founding co-editor of F pis’mo, the first-ever Russian magazine and platform dedicated to feminist and queer writing. Life in Space, a collection of her poetry translated into English by Joan Brooks and others, has just been released by Ugly Duckling Presse.

EKATERINA SIMONOVA, b. 1977 in Nizhnii Tagil, lives in Ekaterinburg. Simonova is one of the editors of the poetry series ‘InVersia,’ one of the few Russian publishing projects operated only by women. She moved from traditional to freer poetic forms to treat female subjectivity in the daily life of provincial towns with greater realism.

KIT EGINTON is a writer, translator, editor, and SAT tutor from Iowa City, Iowa. She is an editor at the Hypocrite Reader, a leftist magazine of useful, unexpected writing. She spent 2019 at the European University in St. Petersburg.

LOLITA AGAMALOVA, b. 1997 in Grozny, Chechnya, lives in Moscow. A radical anarcho-feminist and lesbian activist, Agamalova is currently a doctoral student in philosophy. Her poems combine post-structuralist terminological networks, concepts from feminist theory, and deter- minedly transgressive and symbolic images.

AINSLEY MORSE, b. 1983 in Lebanon NH, lives in Vermont. She teaches Russian language and literature at Dartmouth College and translates from Russian and Bosnian/Croatian/Serbian. Other translation publications include Lida Yusupova’s The Scar We Know (with multiple translators; forthcoming from Cicada Press), Andrei Egunov-Nikolev’s Beyond Tula: A Soviet Pastoral (ASP 2019), and Vsevolod Nekrasov’s I Live I See (with Bela Shayevich, UDP 2013).

VALZHYNA MORT is the author of three poetry collections, Factory of Tears (Copper Canyon Press 2008), Collected Body (Copper Canyon Press 2011) and, mostly recently, Music for the Dead and Resurrected (FSG, 2020). Born in Minsk, Belarus, she teaches at Cornell University and writes in English and Belarusian.

EUGENE OSTASHEVSKY's books of poetry include The Pirate Who Does Not Know the Value of Pi (NYRB 2017), wonderfully translated into the language of German by Uljana Wolf and Monika Rinck, and into the language of music by Lucia Ronchetti, and The Life and Opinions of DJ Spinoza (UDP 2008), now available in digital copy here. As translator from Russian, he works primarily with OBERIU, the 1920s-1930s underground circle led by Daniil Kharms and Alexander Vvedensky. He has edited the first English-language collection of their writings, called OBERIU: An Anthology of Russian Absurdism (Northwestern UP, 2006). His collection of Alexander Vvedensky’s poetry, An Invitation for Me to Think (NYRB Poets, 2013), with contributions by Matvei Yankelevich, won the 2014 National Translation Award from the American Literary Translators Association. He is "against translation."

KEVIN M.F. PLATT is Edmund J. and Louise W. Kahn Term Professor in the Humanities at the University of Pennsylvania. His scholarly work focuses on Russian poetry, culture, and history. His translations of Russian poetry have appeared in World Literature Today, Jacket2, Fence, and other journals. He is the author or editor of several scholarly books, the most recent of which is Global Russian Cultures (University of Wisconsin Press). He is also the founder and organizer of the poetry translation symposium Your Language My Ear.

GLOBUS BOOKS is an independent bookstore serving San Francisco since 1971. It offers a wide-ranging stock of books on all things Russia. Globus is actively working with the libraries across the states on completing their holdings for Russian publications, both contemporary and out-of-print. The Globus Books team is well-known for its expertise in first editions of Russian literature, books on the Russian avant-garde, early imprints and travel and voyage books. Under the new management, Globus strives to serve the Bay Area, bridging gaps, continuing cultural traditions and giving voice to unrepresented communities in Russia and the US. Globus Books features several series of literary and cultural events on its YouTube Channel (https://www.youtube.com/c/GlobusBooksSF), including Literary Translation Round Table, History/Anthropology, Playtime and Storytime for children and more.

ZARINA ZABRISKY is the author of three short story collections and a novel "We, Monsters" (Numina Press) and a producer of literary and cultural programs at Globus Books. Zabrisky's work appeared in nine countries in over fifty literary magazines and anthologies, including The Nervous Breakdown, A Capella Zoo, Eleven Eleven, The Rumpus, Guernica, and received nominations and awards.