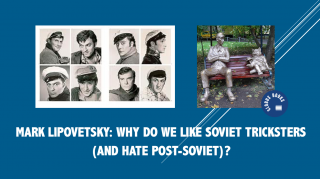 Globus Books is honored and excited to invite you to Mark Lipovetsky's talk about Soviet tricksters on April 21, 2021, at 6 pm PST (SF), 9 pm EST (NY).
Not only Ostap Bender, but also Benya Krik, Julio Jurenito, Ivan Babichev, Buratino, Venichka (Moskva-Petushki), Nikolai Nikolaevich and Sandro of Chegem, among many other characters of Soviet literature and film represent a cultural trope of the trickster. In Soviet culture it enjoys incredible popularity, which suggests a special importance of this type.
Mark Lipovetsky has been studying Soviet tricksters for a long time and is preparing a new book on this subject. His main thesis is that Soviet trickster narratives served as the main source for a distinctive type of Soviet subjectivity – a Soviet cynic – which was an alternative to the normative ideological subjectivity.

Mark Lipovetsky is Professor at the Department of Slavic Languages, Columbia University (New York, USA). He is the author of ten books and editor/co-editor of twenty volumes on 20 th-21 st Russian literature and culture. He is mostly known for his works on Russian postmodernism, New Russian drama, the trickster in Soviet culture, and Dmitry Prigov. Lipovetsky is also one of four co-authors of the Oxford History of Russian Literature (2018). Winner of AATSEEL award for the outstanding contribution to scholarship (2014) and Andrei Bely Prize for his input to Russian literature (2019).

There will be a limited number of seats; please contact Globus Books via FB messenger to register.
This program is produced and hosted by Zarina Zabrisky, the author of three short story collections and a novel "We, Monsters" (Numina Press). Zabrisky's work appeared in nine countries in over fifty literary magazines and anthologies, including The Nervous Breakdown, A Capella Zoo, Eleven Eleven, The Rumpus, Guernica, and received nominations and awards. Zabrisky runs literary and cultural programs at Globus Books.