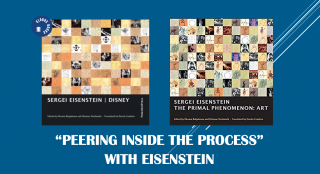 We will also be live streaming the event on our YouTube channel (https://www.youtube.com/c/GlobusBooksSF/videos) and later will share the edited version of the program.

Among Eisenstein’s unrealized projects—which by some counts number as many as thirty—are works in varying degrees of development, each of which have left hugely different archival traces. In this talk on Eisenstein and his unrealized cinema, Dustin Condren will discuss materials from two such projects, developed in vastly different contexts and each leaving remarkably different traces: the 1930 Hollywood Gold Rush film, Sutter’s Gold, and the 1932–33 Soviet “comedy of eras,” MMM.

Sergei Eisenstein is perhaps the most well-known among all Soviet filmmakers, thanks primarily to the worldwide success of his landmark films Battleship Potemkin and Ivan the Terrible. But he is also one of the more poignant representatives of the capriciousness of creative fate (and its early Soviet specifics), having experienced amid his occasionally remarkable successes an overwhelming degree of failure to realize the projects he began. Already by the age of twenty-eight, Eisenstein had started to feel the symbolic burden of what he would later call his “swarm” of unrealized projects and developed in his 1927 diary a pseudo-gnostical system of odd and even numbering to track and predict the alternation of failed and successful projects. For Eisenstein, the “unfinished” and “unrealized” work of art takes on a meaning beyond just creative foundering: it is a crucial part of the dialectic that ultimately makes up an artist’s oeuvre. For those who are able to examine, as we are, the fragments of these unrealized works, they are an opportunity to “peer into the process” and observe the “coming into being” of form itself.

Dustin Condren is a professor of Russian in the Department of Modern Languages, Literatures, and Linguistics, an affiliated faculty member in the Department of Film and Media Studies at the University of Oklahoma, and a photographer. He teaches courses on Russian literature, cinema, theater, and culture and is currently working on a book that explores ways of understanding films that are imagined and prepared, but never made. I do this by analyzing a series of unrealized projects from the 1920s and 1930s by the Soviet filmmaker Sergei Eisenstein. His photographs appeared in major domestic and international publications, including The New York Times, The Los Angeles Times, USA Today, The Washington Post, The New Yorker, Time Out, The Times London, The Guardian, Bild, Die Zeit, and in online magazines such as Pitchfork, Noisey, The A.V. Club, NPR, and numerous other print and online outlets. Dustin Condren’s groundbreaking translation of Leo Tolstoy's The Gospel in Brief was published by HarperCollins in 2011.

This program is produced and hosted by Zarina Zabrisky, the author of three short story collections and a novel "We, Monsters" (2014). Zabrisky's work appeared in nine countries in over fifty literary magazines and anthologies, including The Nervous Breakdown, A Capella Zoo, Eleven Eleven, The Rumpus, Guernica, and received nominations and awards. Zabrisky runs literary and cultural programs at Globus Books.